Dr. Fióna Gallagher is a native of Sligo town and has a long-abiding interest in the urban fabric and development of the town, and urban morphology in particular. She holds a PhD in History from Maynooth University, with a thesis entitled  'Re-housing the urban poor in Irish provincial towns 1880-1947; a case study of Sligo'. She is the author of the acclaimed The Streets of Sligo: urban evolution over the course of seven centuries', (2008)  and co-author of the Royal Irish Academy's Historic Town Atlas of Sligo, (2014).  In December 2019, she wrote the Heritage Guide insert for Archaeology Ireland, entitled 'Sligo, a historic urban centre on the Atlantic coast'. Between 2016 and 2018 she was a senior tutor in the history department of Maynooth University.
​
Fióna is currently researching the effect of the 1832 Cholera epidemic on Sligo and other provincial Irish towns, and gave a paper to the Irish Medical Humanities Network conference a the National Library in 2019, entitled,  "Sligo is a Furnace – The Town has become a place of the Dead".
Major Publications:

The Streets of Sligo: Urban Evolution over the course of Seven Centuries, (Sligo, 2008)

Connect:
email: fionagallaghersligo@gmail.com
Twitter: @GallagherSligo
Exhibitions:
In May 2016, I co-ordinated the research, design  and development of the major exhibition 'Champion of Liberty', on the life of William Bourke Cockran, (1854-1923), Sligoman, US Congressman, international statesman, and Churchill’s mentor, which ran for three weeks at Sligo Town Hall.
​
Public Lectures

'Sligo's Cholera epidemic experience. - The town has become a place of the dead.' Paper given at National Library of Ireland, to the Irish Medical Humanities Network, December 2019.
'Sligo is a Furnace – The Town has become a place of the Dead', An examination of the Cholera epidemic in Sligo town in the summer of 1832'.November 2018, at Sligo Stoker Society Conference on Sligo's influence on the author of 'Dracula'.
'Mercantile Sligo: The impact of expanding trade and manufacturing on the development of the 19th century town'. Delivered at the Sligo Field Club Annual Conference," Sligo: The making of a 19th century Provincial Town: Examining how national political and social events, impacted on the urban fabric of 19th century Sligo".  October 2018.
"W. Bourke Cockran – ‘The Champion of Liberty’: Irish by birth, Continental by Education, and American by Choice". Sligo Field Club Lecture, April 2018
‘Sligo’s urban origins and growth since 1242’, Keynote talk, as invited lecturer, given as part of Sligo Co. Council’s programme for Heritage Week,  August 2016.
‘Sligo Workhouse and its digitized records’.  Lecture at Sligo Library, during Heritage Week, 2016. The talk was part of a formal launch of the digitized on-line publication of the Workhouse Registers from 1847.
‘Sligo’s early urban development: a western Anglo-Norman outpost’.Royal Irish Academy – Irish Historic Towns Atlas symposium, at the Hunt Museum Limerick. ‘Learning from the past: mapping our future’, (October 2014)
Seven Centuries of a Borough - Address to Sligo Corporation on the occasion of its Dissolution, May 2014. I was invited by the Mayor of Sligo to formally address the last meeting of Sligo Borough Council, on the day of its dissolution, after 400 years as a chartered Corporation town.
‘Mapping Sligo’s Urban Development 1242-2012’.  Keynote lecture, Sligo Field Club Annual Conference, May 2012.
'Forthill and Sligo, Seven Centuries of a Garrison Town’, Summer 2009. This was an adult education group involved in the ‘Legacy of Belief’ cross-border project, under the auspices of Sligo Co. Council. The purpose of the ‘Legacy of Belief’ programme was to explore the impact of Anglo-Irish heritage, partition and the Northern Ireland conflict on Sligo.
Watch:
October 2019: Taking questions with Dacre Stoker at The Word, Sligo Central Library:
​https://sligolibrary.ie/sligo-central-library/

An interview with the The Irish History Show.  Podcasts on Ireland's rich and varied history.  Myself and Dr. Marin McGarry explore the links between Sligo's 1832 epidemic, and the great Gothic Novel of the 19th century, 'Dracula'.
Bram Stoker and the Sligo Cholera Epidemic of 1832
http://irishhistoryshow.ie/62-bram-stoker-and-the-sligo-cholera-epidemic-of-1832/… 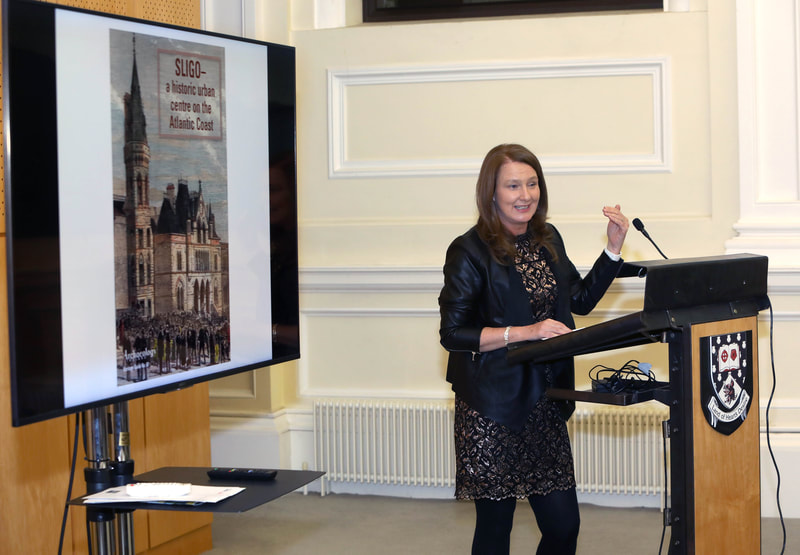 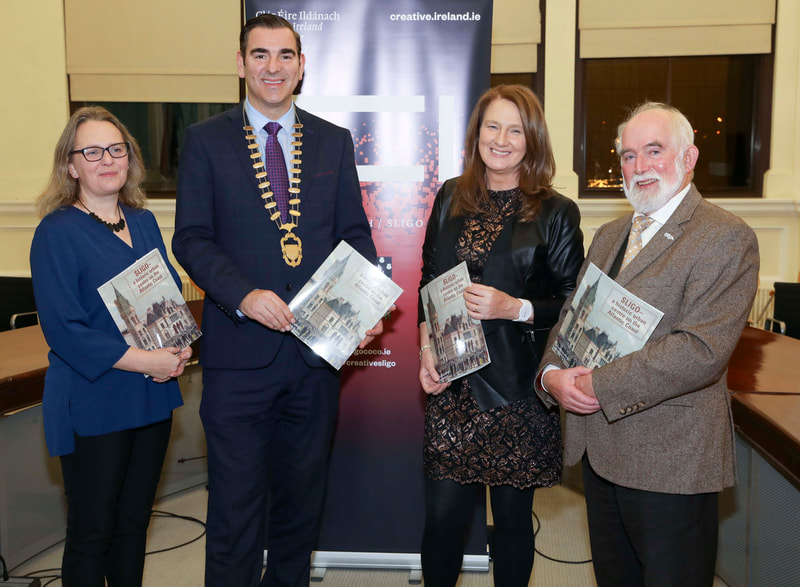 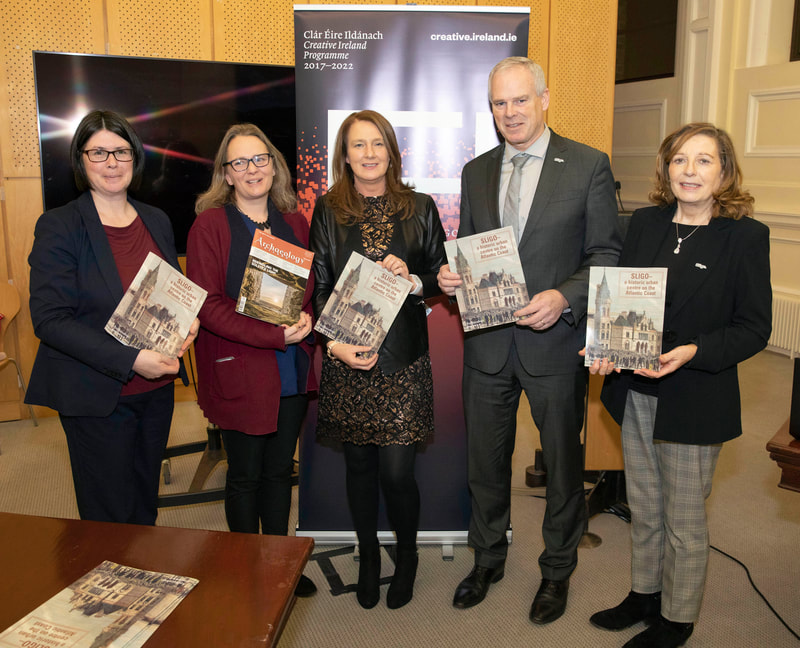 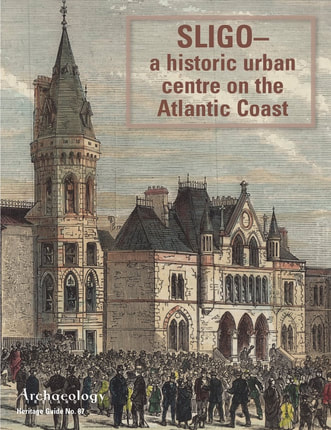 Fióna is also a founder member of the Sligo Stoker Society, which is a voluntary group that aims to highlight the historic connections between the author Bram Stoker (1847-1912) and Sligo Town. Stoker’s mother, Charlotte Thornley Stoker (1818-1901) grew up in Sligo town, and survived the cholera pandemic of 1832. Charlotte's 'Experiences of the Cholera in Ireland' (1873) offers us a  credible eyewitness account of events in Sligo. It's thought that her memoir  had a significant influence on Bram Stoker’s most famous work, the novel Dracula . 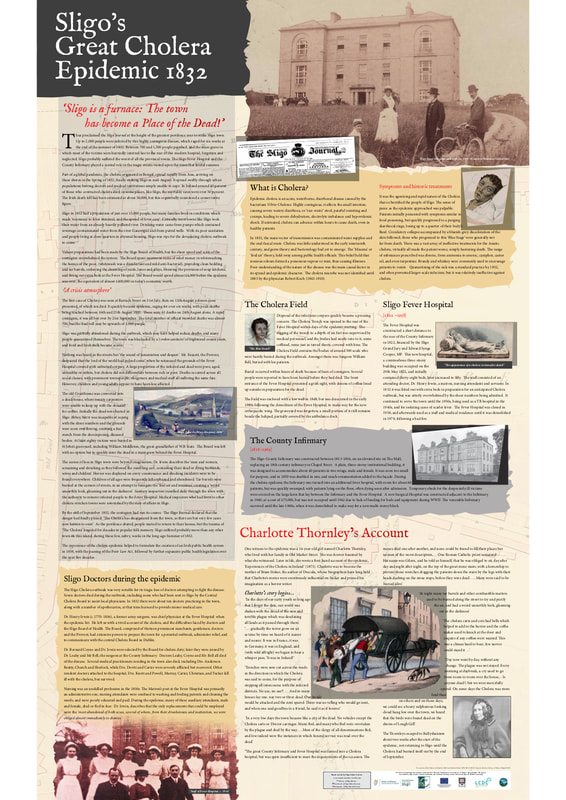 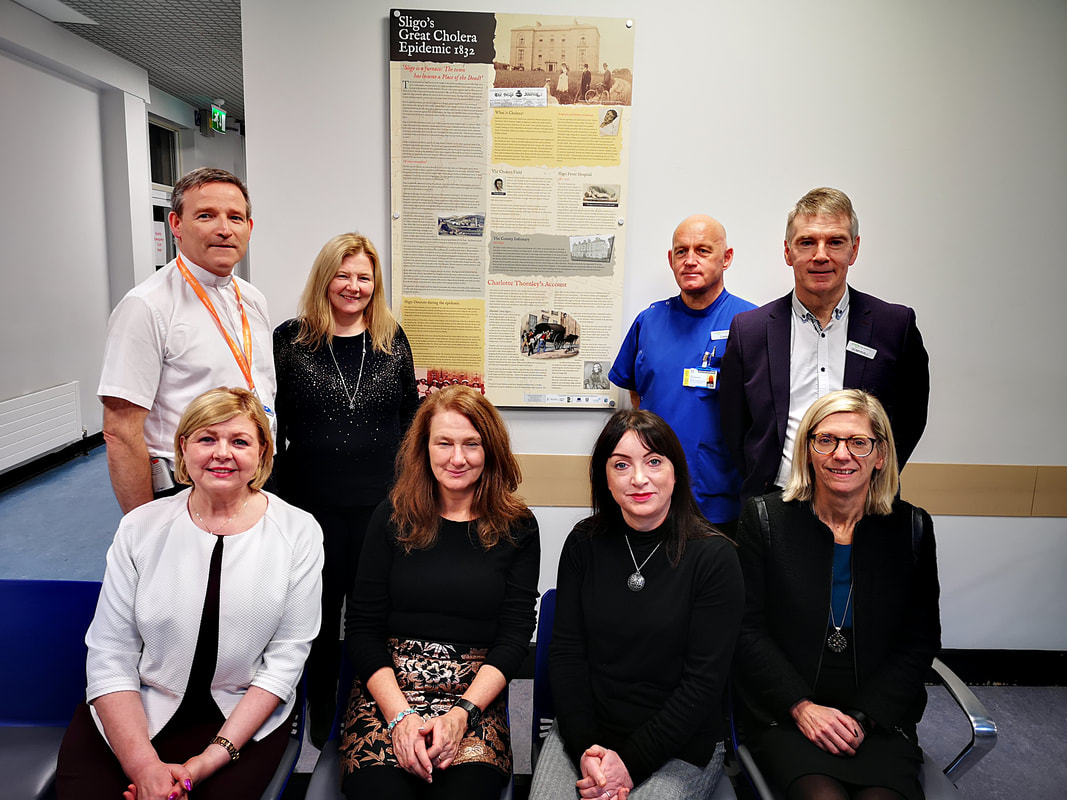 Sligo University Hospital staff, management and members of Sligo Stoker Society commemorating the staff and patients who died in the 1832 Epidemic at Sligo Fever Hospital. December 2019
Powered by